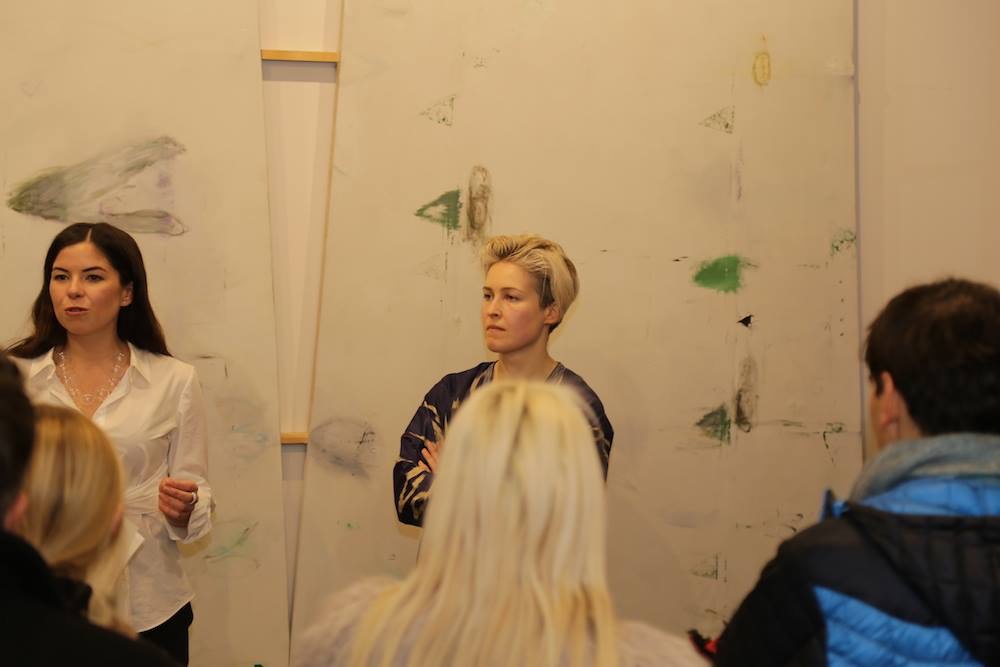 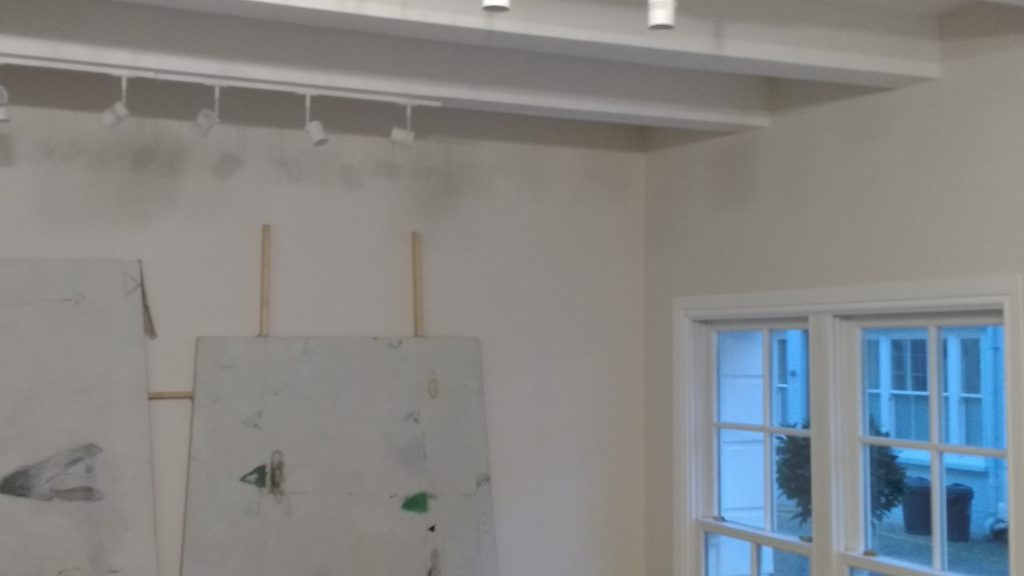 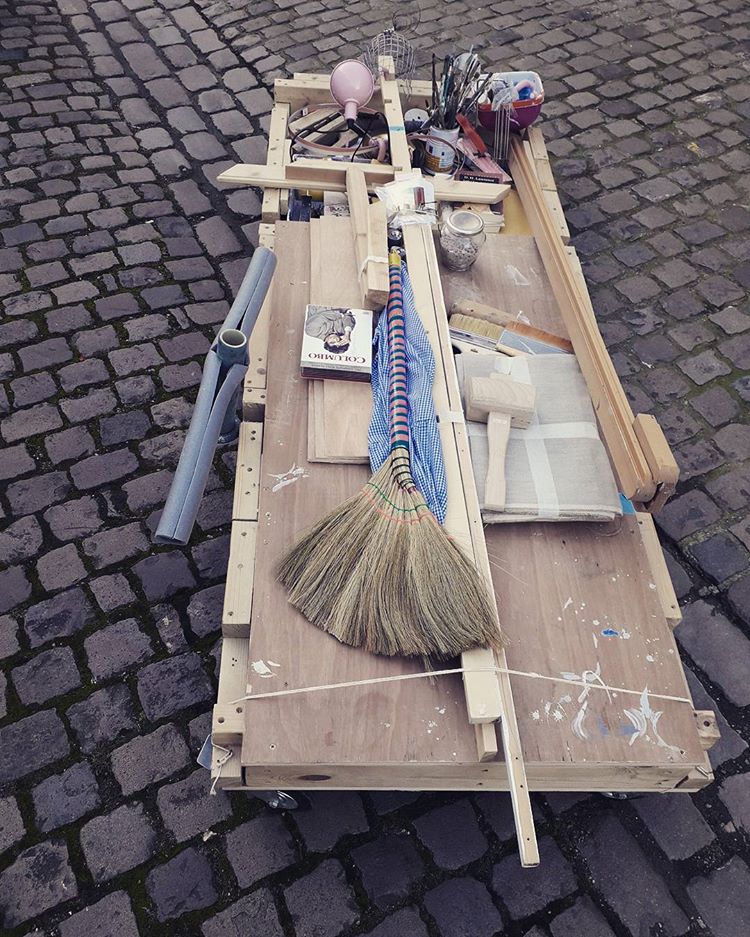 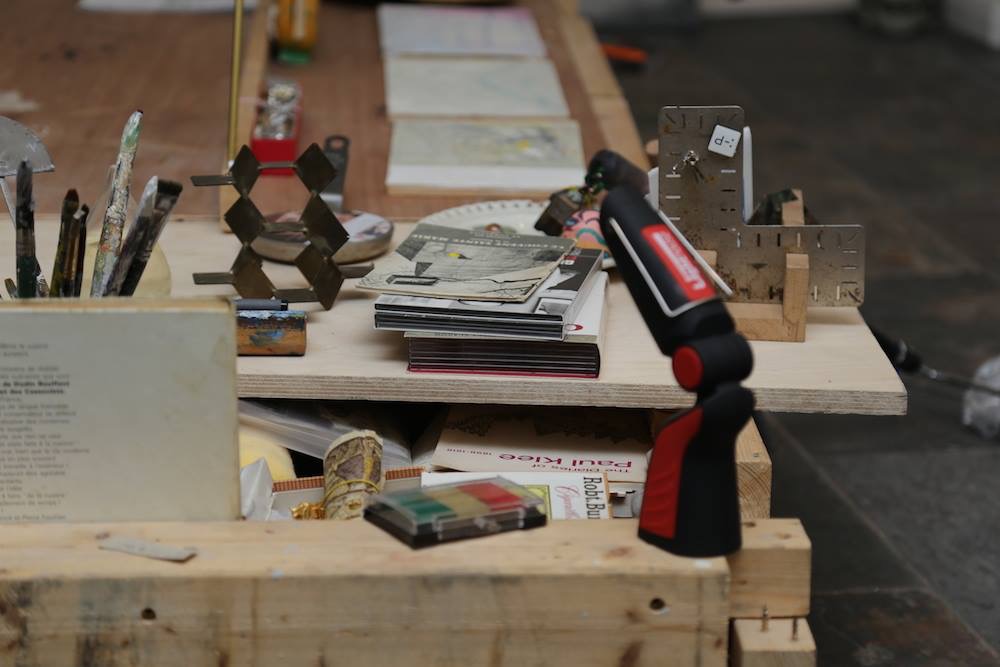 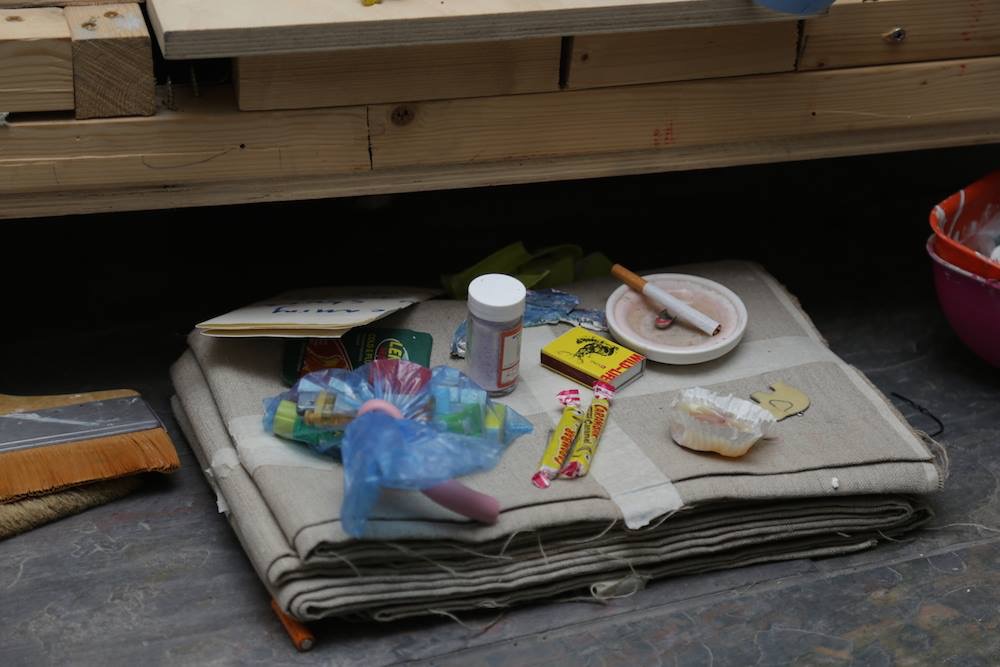 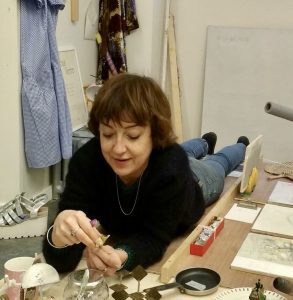 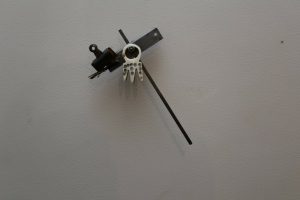 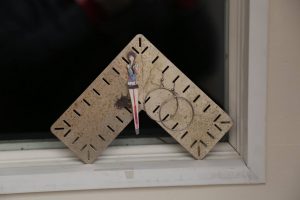 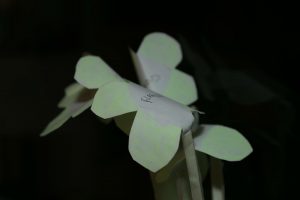 I have been happy in developing connected ideas with the curator Olga Pogasova, another migrant in this city, and to move my work forwards in a close and supportive atmosphere. In thinking about an exhibition for the new space RED DOOR, we started by considering my work Flight of The Storks, which related in a poetic or a metaphorical sense to the exhibition’s theme of migration, and then thought of turning my Charrette into a moving assemblage, like an act of invasion, moving from my studio to the new space.

In ‘Flight of the Storks’ the two trapezoid surfaces meet and separate, one becoming the other, repeating but becoming different – because time passes. It happens the same way for the arrow/ bird/ plane shapes. There are two different diagrams interplaying here, one concerns a territorial encosure, the other a desire of migration. As with real migrations, elements disappear and reappear, slightly transformed by the journey. The making of the work challenges the issue of the limits of the surface as well as confirming to me the importance of ‘ acting as if for real’: to create a migration rather than to illustrate it.

‘Let’s Go Charrette’ is an installation which adapts to the space. It is composed of a wooden structure on wheels as well as numerous objects, all coming from the artist’s studio. The word ‘Charrette’, now used in France as a byword for an architectural deadline, was also a real object, a wheeled wooden cart, which would carry away diagrams and section plans of the architects along physical routes in the 19th century. In my studio this structure has many different functions: it is a storage unit, a bench, sometimes a support to make work in the position of the architect.

The experience of leaving is somehow sad but to enter in a new territory is exciting. My experience of moving places, from Paris to London, and more recently from a large family house to a smaller flat have comforted my idea of a migration that is built upon a desire of assemblage, of things and thoughts, de- constructing and re-constructing, creating space to move and to breath. It is a positive concept, a natural one, also subject to tension as we do not all share the same desire, and at the same time. That is the experience I have tried to recreate in entering through the Red Door; I came pushing my Charrette into the space and started organically to display my small paintings, objects, art materials, TV screen. I thought that the Charrette would make a perfect bench for the visitors. From what I see objects can take on different functions, and there are also many different ways to create sympathy between them, sympathy of colour, of shape, of function, there are also the ‘loose fit’ connections that come to my mind that I cannot really explain. The Charrette represents the minimum space and surface on which I could live and move; the bench, the bed of the homeless, or the studio of the vagabond.

The new non-profit Red Door Project Space opens on the 1st of December in South Kensington. It is designed to be a meeting point for different cultural disciplines and is dedicated to supporting the creation of new contemporary practice through an ensuing  programme of exhibitions, commissions, events and artist development.

The exhibition took place in four locations in the Walworth area. Inside the ASC art gallery, personal objects belonging to people living and working in Walworth were exhibited along with their stories. Outside, artworks by artists from the ASC studios were displayed in the local pub, library and Susan Coin Laundrette.
This exhibition has been developed by six curators from Central Saint Martins art school. The gesture of swapping contents of the studio into local sites and local stories into the gallery investigates the relationship between the ASC studio-gallery and the local area.

I live in the area of Walworth and the wooden stool from my father was displayed among the other treasures from the locals in the ASC Gallery.

My work was INSIDE, OUT in Susan Coin Laundrette on East Street, and very much part of Life.. 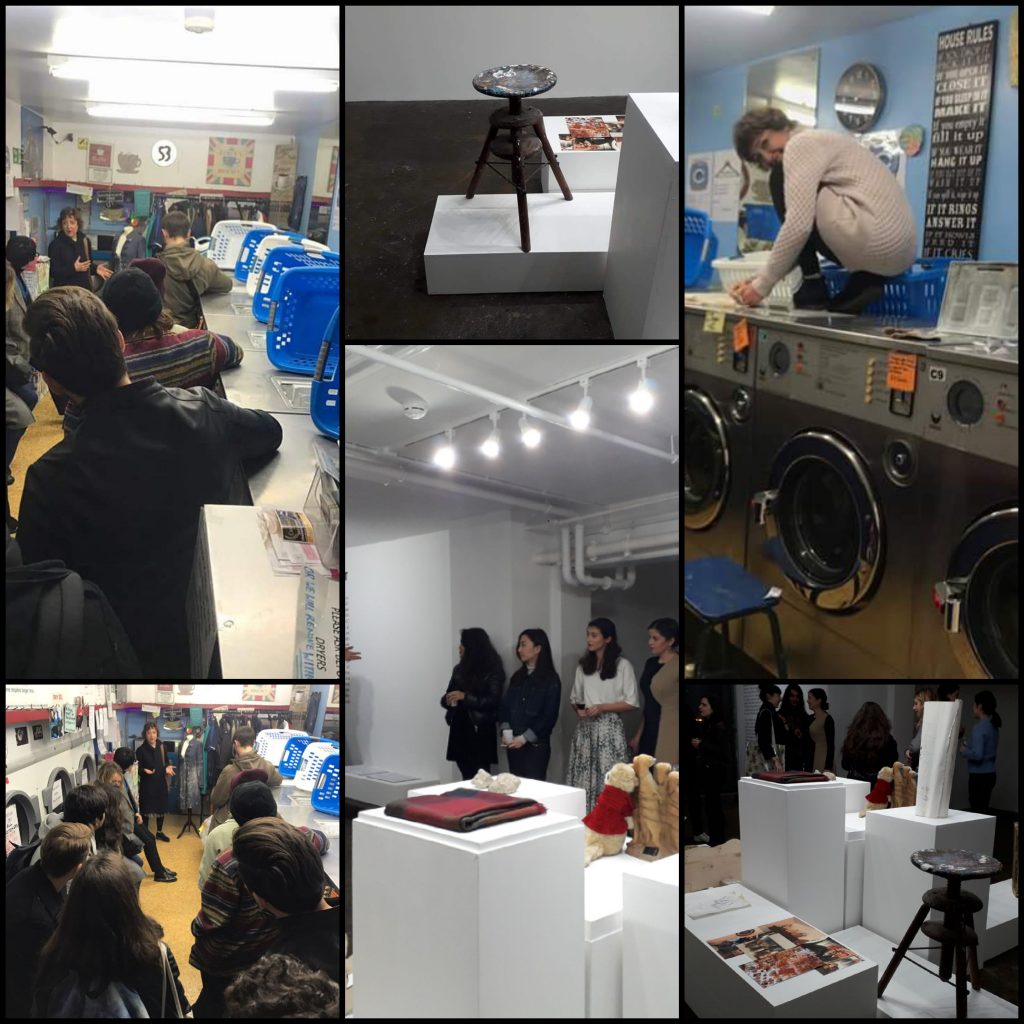 The Blurring of Art and Life, personal statement.

I believe in the blurring of Art and Life.  Art is everywhere and accessible to everyone, taking form in the artist’s studio and ending up as ‘culture’ in a gallery, a museum, a church, a house – it is visible on the walls of the city, in the drawings of a child. Each of us has an idea of what art is and what it does. It certainly adds a lot to my life.

The experimental aspect of my work is crucial in the development of my art practice. It includes paintings and objects made in different materials, with different moods and modes of action. This is not only ‘personal’ work, they have their own scale and aesthetic that sets them as autonomous art objects.

The earrings in the vitrine made of acrylic paint, are they earrings or sculptures? They are both. The blue robe covered by layers of paint, is it a trophy from the artist or a robe made by a designer, do you think it is ugly, dirty or beautiful? Would you hang it on your wall, or wear it?

I believe that it’s necessary for people to create associations and groupings, freely , secretly or with purpose, just like the Bowerbird creates arrangements of coloured objects outside its nest.

I choose to exhibit my artworks in the Launderette because the place is very lively, colourful, and full of interesting things: it is a place where you want to stay, a small world in itself. That’s why my little works of art feel so welcome in the space – some are easy to identify as paintings hung on a wall, the other ones are hidden-  included, absorbed. As a result the Launderette has been transformed into something that is new.

I believe in the blurring of art and life, each giving to the other, generously.

Previously at the ASC Gallery 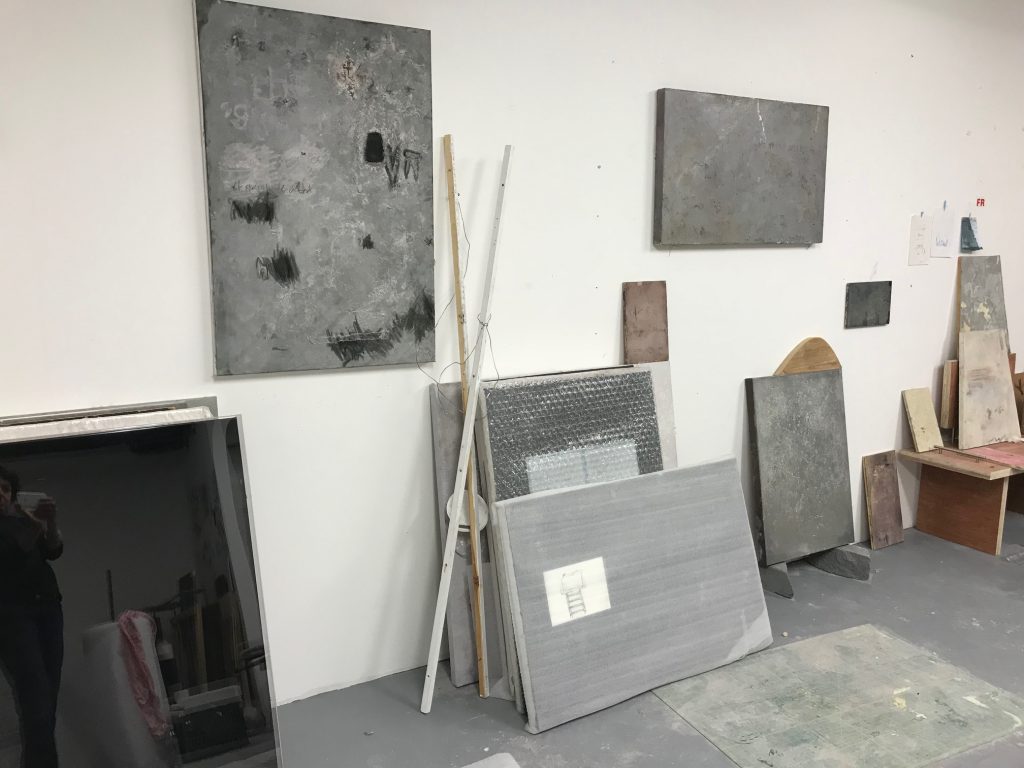 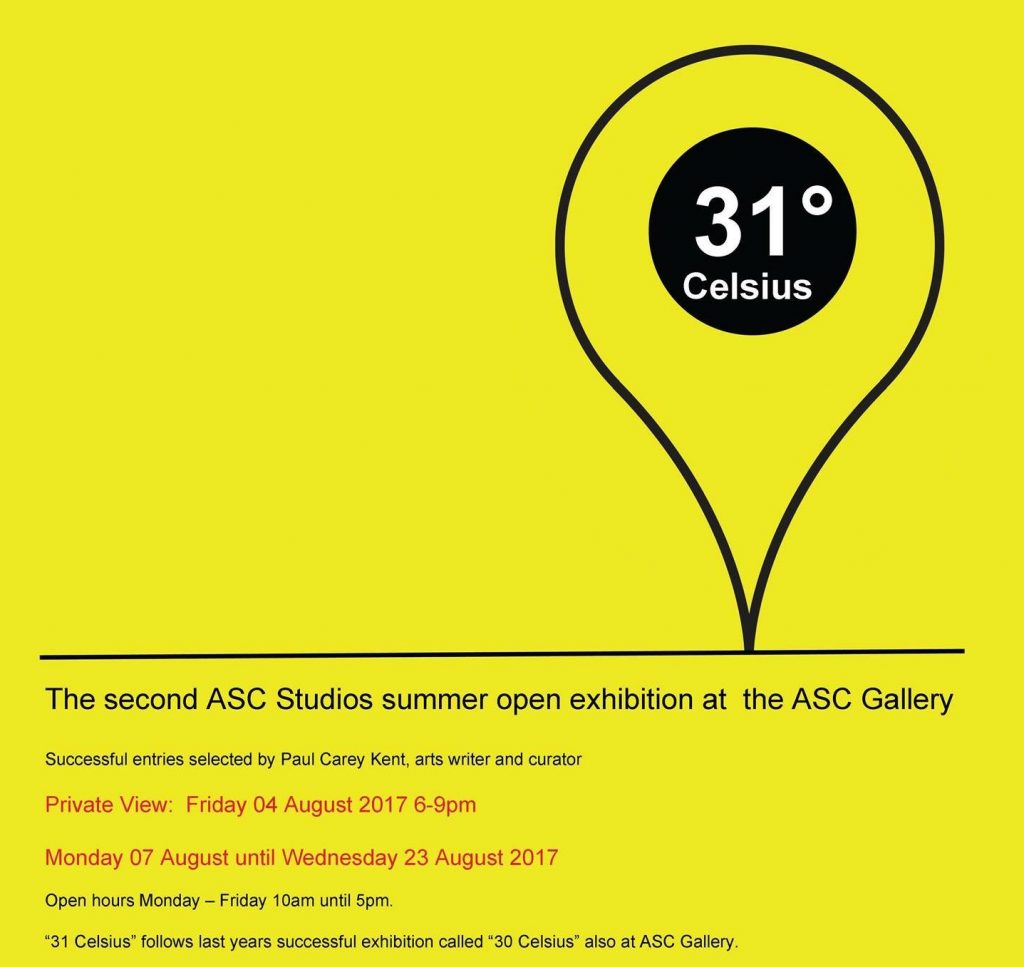 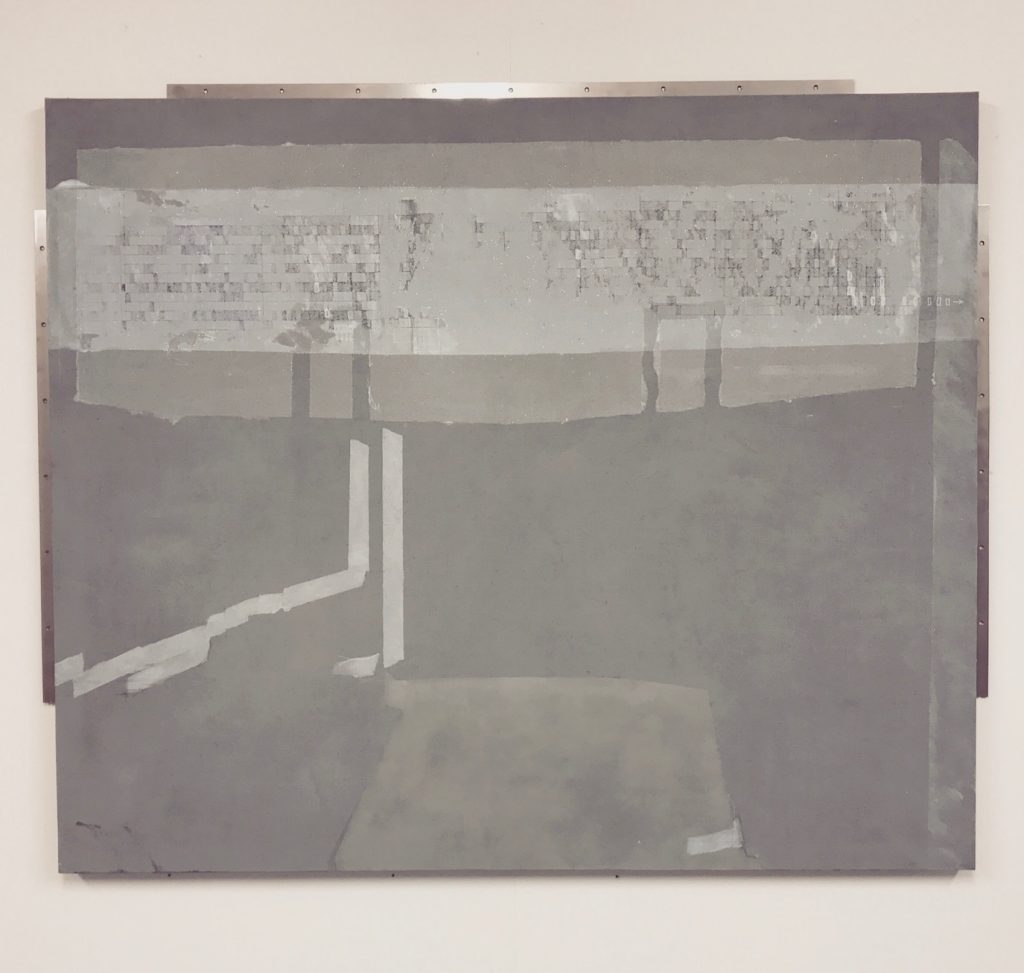