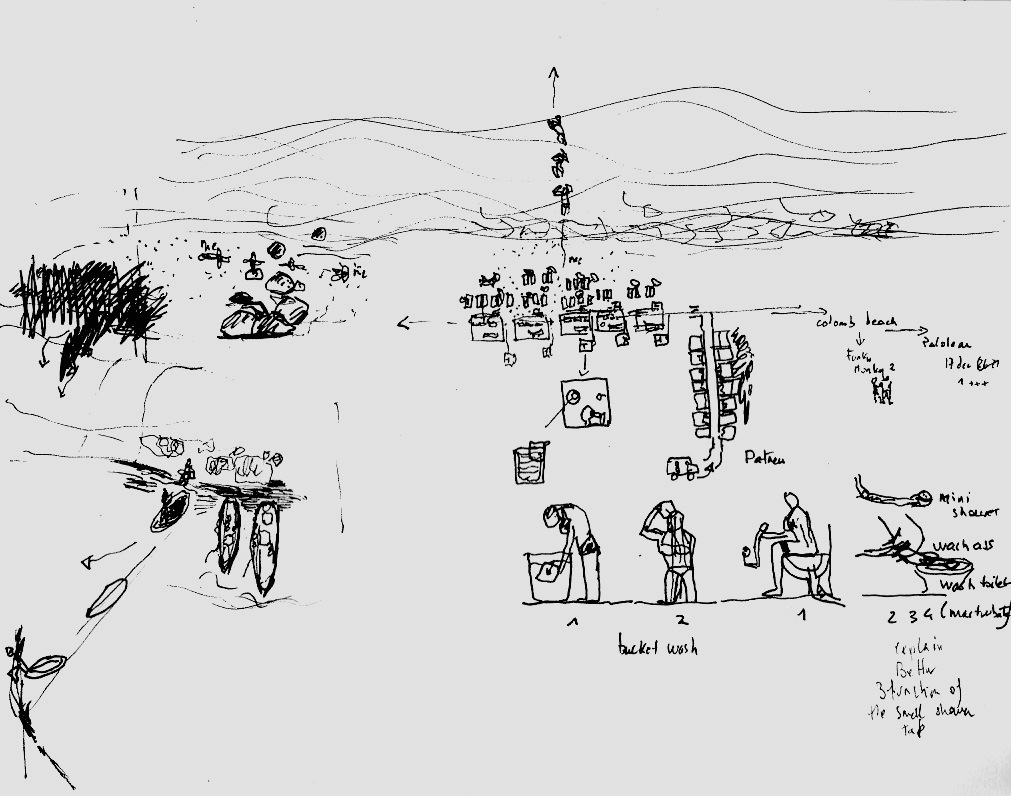 I have spent the New Year in Goa (India), a beautiful country that is very inclusive. Things are organised in a loose fit, with no directive lines visible, no fences: It is organisation within chaos. It has been easy to move around that space because it felt familiar. After I came back from India I tidied my studio, organising things and thoughts as I would do at home, or in the Indian Hut that I stay in; organising the chaos, trying to control it as well as making sense of it.

When I am tidying I am moving, back and forth, examining the objects, moving them, thinking..

Shall I keep this or not?
Why do I like it so much? Isn’t it stupid?
It has been here for years.. I will keep it for a while and then see..

My recent artwork Magazin(e) came out of that questioning, it has been made in experience as a performance where reality and imagination come together. 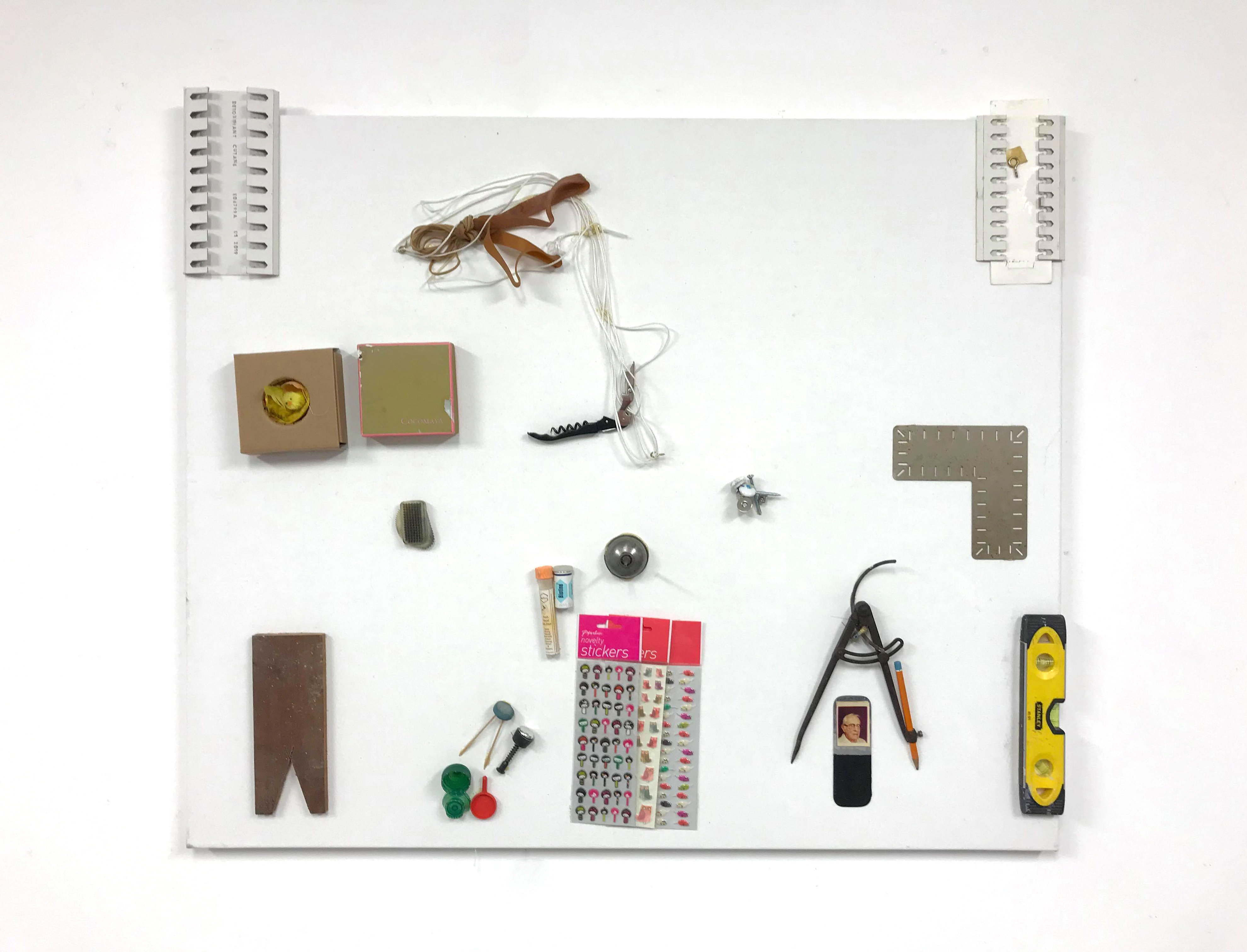 The objects in this piece have been ‘waiting’ in the studio, some of them for a long time, other brought in recently. They are regrouped, by shape, or placed at the opposite sides of the canvas. There is an overall feeling of organisation, and the object are mostly functional, they exist to measure, to aligne, to open, to rub, to fill with oil. The composition shows geometry and also regrouping. If there is a logic in this assemblage it has yet to be found by myself and by the viewer. Some of the object have undergone alterations, like the picture of my grand father that I previously glued on a pill shape card, and the yellow bird inserted in the square card box. I would call these the ‘second’ or ‘third generation’ objects…

There is a notion of recycling but it is purely psychic, as opposed to the making of a new object of art that is physical. Found objects (sometimes referred to by the French term for found object ‘objet trouvé’). 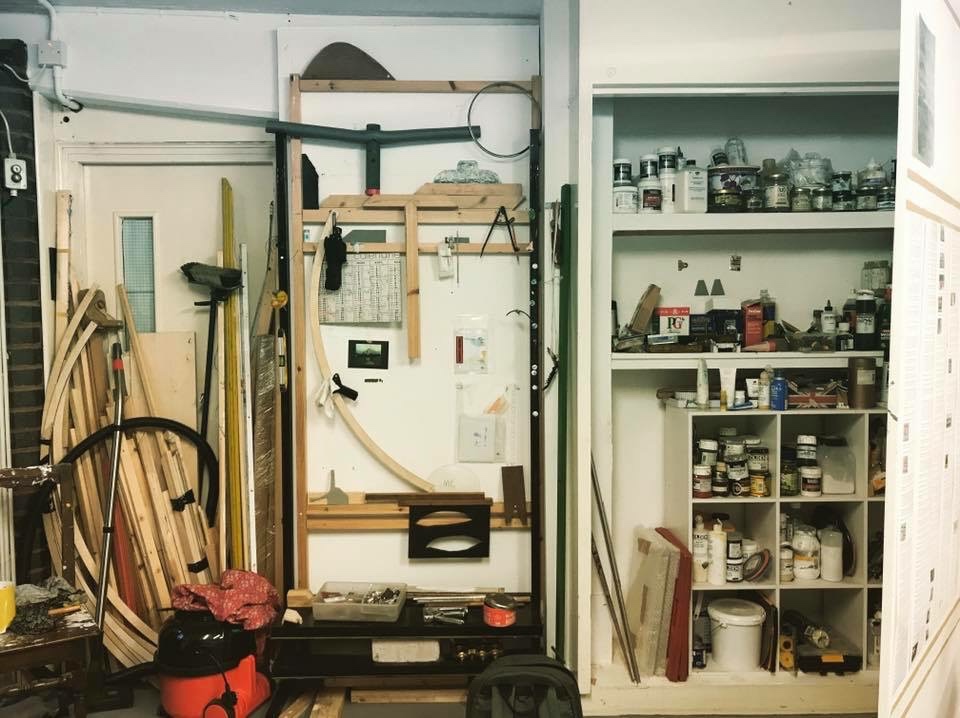 ‘Au Object trouvés’ is the place you go in Paris when you have lost something; it means then that what you find in the street or in your flat – that inspires or intrigues you – is something you have had lost, and happy to find again. That is how I perceive my interest in particular objects, why I keep them, lose them, find them and also give them away in an artwork. As soon as the object is integrated in the artwork it looses its connection to a place, a person or a circumstance, so that is not about displaying personal matters but instead releasing history. I will feel lighter, liberated, until new object are ‘found’. 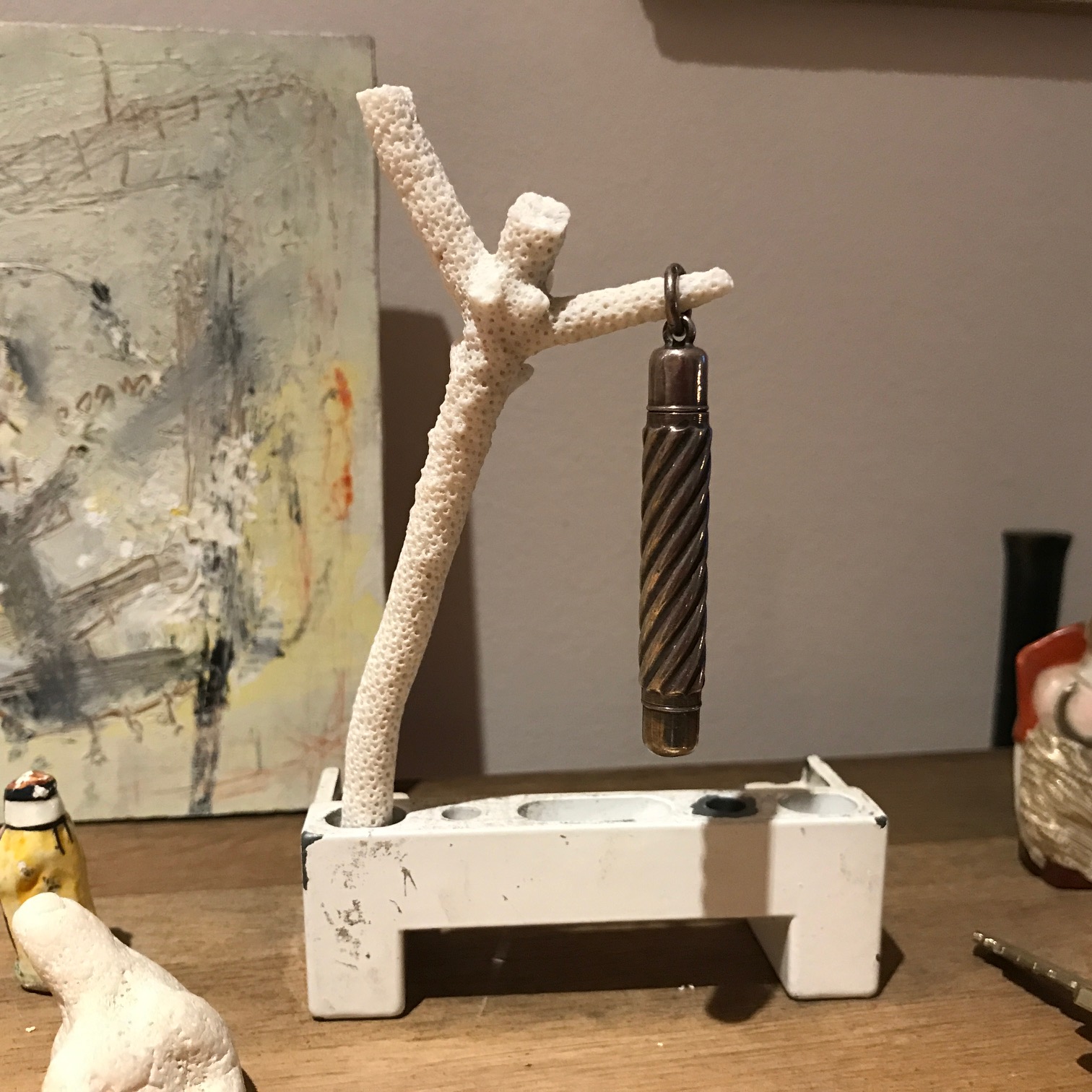 Placed on a shelf and treated as works of art in themselves,
they are always visible, available, and provide a reserve, ‘in case’
I would need one of them… 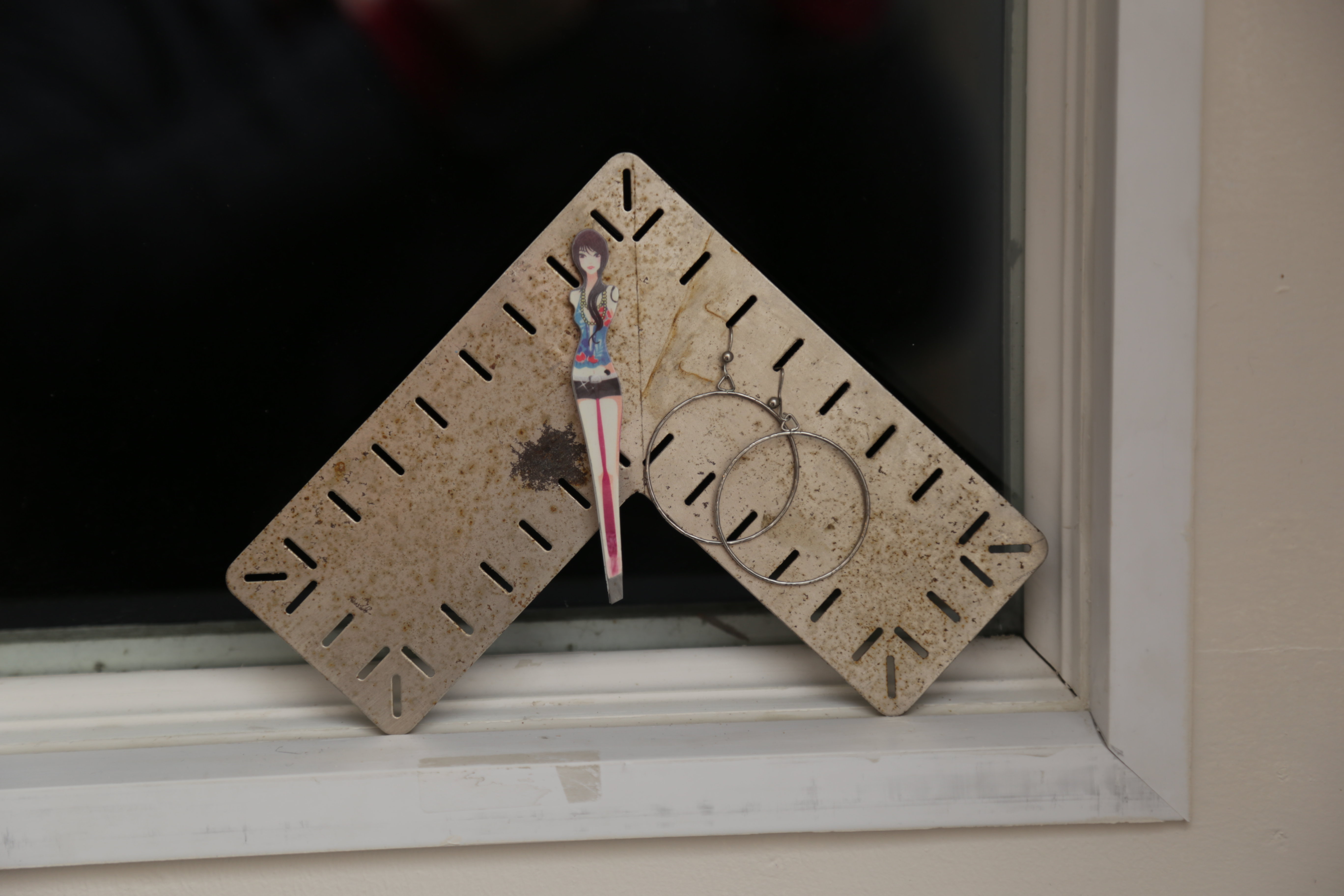 I want to get rid of many things, objects and
associated feelings.. but each time I am in the
process of tidying I ‘retrouve’ objects. 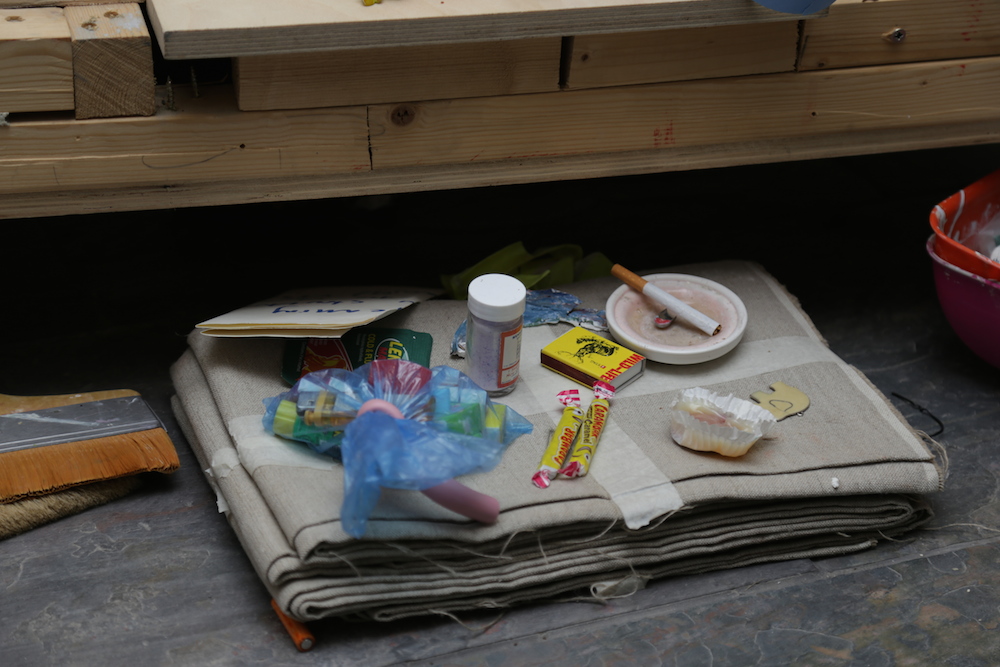 In some special occasion the objects are organised around the lines of a function, as in the installation « Lets Go Charrette » at Red Door Project Space. On a side table made of linen sit sweets, Lemsip, and a fag, that the artist ‘vagabon’ would need if travelling with the minimum.

Sometimes the found object is at the origin of the artwork or is added to it later, transforming the art material and adding new meaning to it. > Abstract Machine